How Vin Diesel Got The Rights to "Riddick" Back 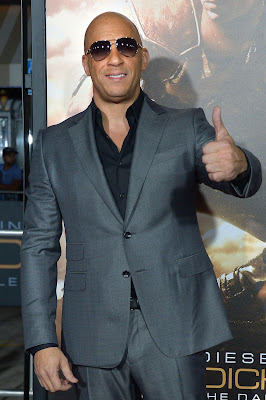 How the franchise star revived the breakout role from 2000's "Pitch Black" after its sequel fizzled, leading to "Riddick."

Vin Diesel doesn't just play Riddick, the intergalactic ex-con who can see in the dark, he owns the role -- literally. And thanks to some shrewd maneuvers from the muscle-bound star, he has kept the franchise alive: Nine years after the last movie in the series, Universal is releasing Riddick on Sept. 6.

Diesel, 46, and Riddick writer-director David Twohy have overcome obstacles, but the key move came in 2006, when Universal asked Diesel to make a cameo in The Fast and the Furious: Tokyo Drift. (Diesel had starred in the first Fast and the Furious in 2001 but walked away from the first two sequels.) Looking to recharge the series, the studio wanted to use his brief return in Tokyo Drift to signal he would be back center stage in a fourth movie. Diesel agreed, but instead of an acting fee, he demanded the studio give him and his One Race production company rights to the Riddick character.

When he hit the screen in 2000 in the low-budget Pitch Black, Riddick became a breakout role for Diesel, who had only had supporting parts in Saving Private Ryan and Boiler Room. Originally, PolyGram wanted Steven Seagal. "It's easy to see Vin now in it, but auditioning is not his gift," recalls Twohy. "He didn't rise to the top of the heap in a clear way, but there was something there."

Twohy and producer Ted Field championed the actor, and Pitch Black, produced for about $22 million, turned a modest profit, grossing $53 million worldwide. But when 2004's sequel The Chronicles of Riddick, which cost more than $100 million, took in only $116 million worldwide, plans for more movies disappeared.

Diesel, his star rising with the continuing success of the Fast & Furious franchise, couldn't shake the underdog Riddick, though. "It's the story of my life," he said in an emotional speech at Riddick's L.A. premiere Aug. 28.

So in 2009, Twohy and Diesel hunkered down in Diesel's kitchen and hammered out a new story. Instead of continuing in the extravagant vein of the second film, they returned to basics, with a lone Riddick marooned on a hostile planet. The project, with Diesel and Field producing, was introduced in 2010 at Berlin's European Film Market, where it was one of the hottest titles in the presales market.

But they still weren't home free. With crews arriving in Montreal in 2012, the money ran out when a completion bond fell through. "It was messy, it was bad," says Twohy. "We basically got kicked out of town." Diesel then personally advanced funds until bank loans were secured and the filmmakers could return to Montreal, where they shot for 48 days on a budget in the $35 million to $40 million range. Somewhat ironically, Universal, which had unloaded the character, then took an equity position in the film and agreed to distribute, allowing Diesel to resurrect his Riddick.

Posted by Dankwa Brooks at 2:34 PM No comments: