After her performance, B reveals she and Jay-Z are expecting. 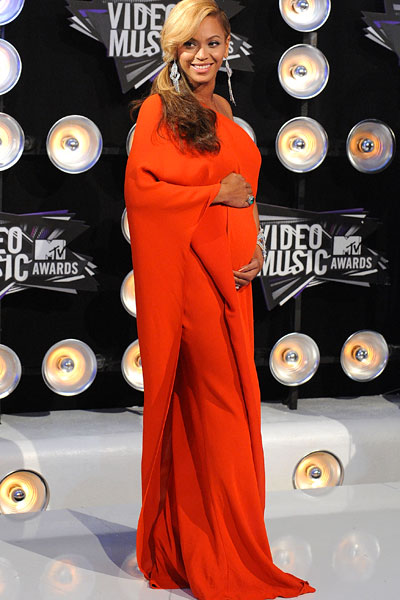 After performing at the 2011 VMAs, Beyoncé Knowles unbuttoned her sparkly jacket and rubbed her belly -- announcing her pregnancy to the world. The camera then cut to Jay-Z and Kanye West in the audience and their over-the-top jubilant reaction.

Married to Jay for three years, the star has said time and time again that she planned on having a baby by the time she was 30; well, B turns 30 early next month.

The power couple tied the knot back in 2008 in a private ceremony at Jay-Z's New York apartment, and since then, there have been years of pregnancy rumors that they've shot down.

In June, the singer told CNN interviewer Piers Morgan that she wanted to get pregnant.

"I feel like a woman. I feel like I'm very aware of who I am. I feel great and I feel like 30 is the ideal age [to start a family], because you're mature enough to know who you are and to have your boundaries and your standards, and not be afraid, too polite -- but you're young enough to be a young woman," she said. "I'm so looking forward to it."

In that same interview, Beyoncé talked about her husband.

"Jay and I have kind of made a decision that we want to be known for our music and not our relationships or scandals. But he is amazing," she said. "I definitely had a very natural friendship and connection with him. We've been together for a very long time and I'm very happy. Love is the foundation of everything, everything I do. My music is inspired by love -- from my family, my husband, my sister."

No word on when the baby is due. 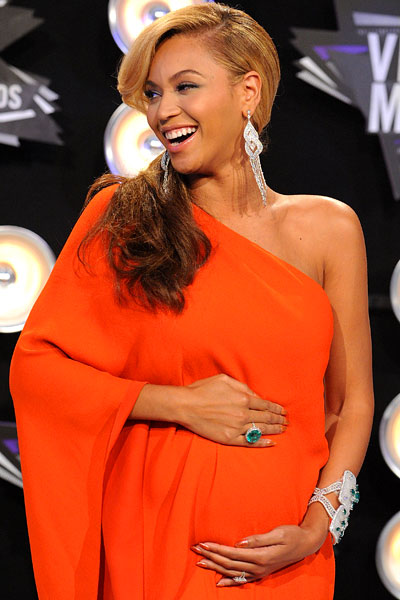 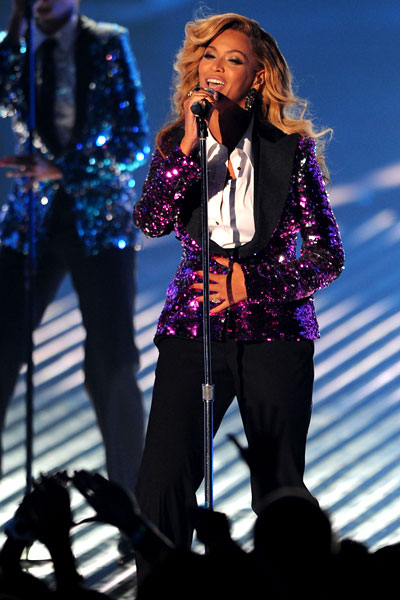 Another year, another unbelievably action-packed Video Music Awards. As expected, viewers were treated to mind-blowing performances and several jaw-dropping surprises. The most unexpected moment came courtesy of Beyoncé Knowles, who not so subtly announced to the world that she and husband Jay-Z are expecting their first child. 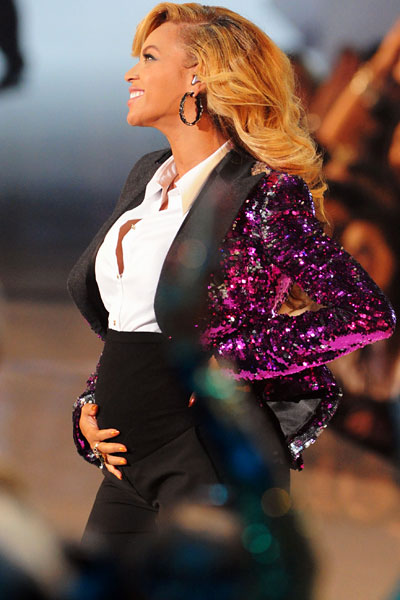 When B unbuttoned her sparkly jacket and rubbed her belly with a knowing smile, (pictured above) after which the camera panned to a visibly elated Jay-Z and Kanye West cheering from the audience, (pictured below) the Nokia Theatre was bursting with warm and fuzzy well-wishes for the soon-to-be parents. And that very public moment of celebration was just the beginning. 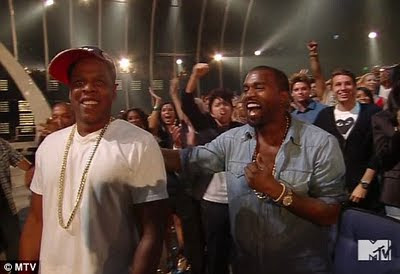 When Beyoncé returned backstage to her dressing room, she was greeted by a team of people who enveloped the visibly happy star with hugs, cheers and congratulations.

A few minutes after her arrival backstage, she was joined by her husband, a very excited West (whose first words upon entering the dressing-room area were "Where is Beyoncé?" as if he could not wait to give B a huge hug) and her former Destiny's Child ladies, Kelly Rowland and Michelle Williams. Even with the doors to their dressing rooms closed, the applause and whoops of joy could be heard everywhere backstage.

"That was an eventful night, to say the least," Jay, still smiling, said to some of the revelers in the hallway, who continued to shower him with congratulations and hugs.

WATCH the Beyoncé  2011 VMA performance below

Get More: 2011 VMA, Music, Beyoncé
The 28th annual MTV Video Music Awards have wrapped, but the real action is just getting started! Stick with MTV News for winners, fashion pics, video and behind-the-scenes stories about everything that went down.

Visit VMA.MTV.com for the latest by CLICKING their logo below 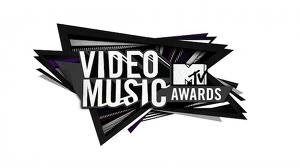 Mad Speculation Sunday, August 28, 2011:
EXCLUSIVE: I’ve learned that Warner Bros was hoping to start production on Clint Eastwood’s musical remake of A Star Is Born as early as February 2012. But now insiders tell me it “could push” because Beyoncé announced her pregnancy tonight at MTV’s VMAs.-By NIKKI FINKE | Sunday August 28, 2011 @ 9:40pm PDT, Deadline.com

Cool Black's Mad Commentary: As I posted here Clint Eastwood is indeed reportedly signed to direct this picture and Beyoncé is reportedly still supposed to star. I keep saying reportedly because these things are subject to change especially in Hollywood. Directors and stars leave pictures all the time and until Principal Photography (when the film actually starts shooting) has begun or even wrapped (some stars leave a project days or even weeks into shooting). As Deadline.com also reported “The project, which has been at WB [Warner Brothers] for several years, has generated talk of pairing Beyoncé with Will Smith and with Christian Bale and with lots of other leading men.” I won’t put any concrete merit until at least the helming studio (WB) have a official Press Release.

If you were excited to see Beyonce acknowledge her undercover bun in the oven at the end of her performance at the 2011 MTV Video Music Awards, you weren't alone. Twitter confirms the moment prompted the site's most ever tweets-per-second.

Twitter confirms the barrage, which came as Beyonce opened her tuxedo top to rub her belly as a proud husband Jay-Z was congratulated by Kanye West, topped out at 8,868 Tweets per second.

The tweets didn't stop there, either. In a release (via Lost Remote), MTV claims more than 3 million VMA-related tweets went out during the broadcast.

Posted by Dankwa Brooks at 5:44 AM