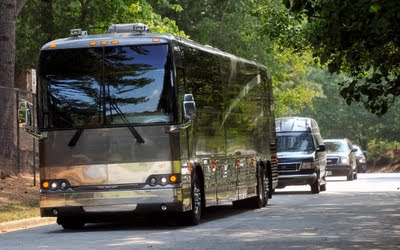 ATLANTA (AP) — Grammy-winning rapper T.I. stepped off a luxury motor coach bus (pictured above)Wednesday evening to start serving the rest of his time in a halfway house for a probation violation with a new book deal and TV reality show waiting for him.

The artist, whose real name is Clifford Harris, earlier left the Forrest City low-security prison in Arkansas and was driven the 375 or so miles in the bus with dark-colored windows, followed by four other cars.

Dressed in a red and blue striped polo shirt and white shorts, T.I. (pictured below) stepped off the bus with his entourage to check into the halfway house.

﻿
﻿
"The storm is over & da sun back out. IT'S OUR TIME TO SHINE SHAWTY!!!!!" the rapper posted on Twitter shortly after his release. "Welcome to the beginning of our Happy Ending!!!!"

T.I. had initially served about seven months at the prison in 2009 after he was arrested for trying to buy unregistered guns and silencers from undercover federal agents. He was on probation after he was released and ordered not to commit another crime or to illegally possess any controlled substances.

He was arrested again in September 2010 in Los Angeles on drug charges after authorities said he was found with four ecstasy pills. He was sentenced in October to 11 months in prison for that violation, and had been set for release at the end of September.

It appears a flock of cameras will follow T.I. regardless of where he goes next. VH1 said Wednesday that the network will film T.I.'s journey home from jail and debut the show in December. MTV aired a similar reality show on the rapper in 2009 called "T.I.'s Road to Redemption: 45 Days to Go," which chronicled his attempts to help others avoid his mistakes.

T.I. has also finalized a book deal. A representative from HarperCollins told The Associated Press that T.I. has written a book called "Power & Beauty" that's set to be released in October. The novel, which was co-written with David Ritz, is a fictional tale about two childhood friends torn apart by dangerous dealings on the streets of Atlanta.

The arrest on weapons charges came after Harris' best friend was killed following a post-performance party in Cincinnati in 2006. The rapper has said the bullets that killed his friend were meant for him.

When he was released from that sentence, he was required to perform 1,000 hours of community service, which he spent mostly talking with schoolchildren about the dangers of drugs, gangs and violence.

But a federal judge said that "experiment" failed when Los Angeles deputies found four ecstasy pills on the rapper.

T.I. back in prison after luxury-bus ride to halfway house

T.I. was back in federal custody Friday in Atlanta, having gone back behind bars less than a day after his Wednesday release from federal prison in Arkansas.

Seems the Federal Bureau of Prisons had a problem with the luxury bus used by T.I., born Clifford Harris Jr., to get to the Atlanta halfway house where he was supposed to spend the final month of his 11-month probation-violation sentence.

"We are awaiting the opportunity to quickly resolve whatever the issue may be that the Federal Bureau of Prisons has with T.I.'s method of transportation -- bus -- from Arkansas to Atlanta, so that T.I. can return to the halfway house to complete the remaining days of his sentence," attorney Steve Sadow said in an email to Reuters. Tip's sentence is slated to end Sept. 29.

On Friday, the rapper was still being held in the medium-security U.S. penitentiary in Atlanta, according to the Federal Bureau of Prisons' inmate locator. He went in Wednesday night.

Prisoners moving from a low-security facility to a halfway house are allowed to travel via private transportation, unescorted, according to TMZ. Team T.I. reportedly told authorities he'd be riding in a van of some sort, sources told the website, leaving out the minor details that it would be a high-end rap-star tour bus, which he boarded under the watchful lenses of VH1 cameras.

Sadow pointed out that prison officials watched his client board the bus, telling CNN there was no intent to mislead anyone about the ride. No drugs or alcohol were involved, he said. T.I.'s wife, Tameka "Tiny" Cottle, told TMZ that authorities "walked him over, took pics and told him good luck in life," and should have told them at the time to use a van instead, if the bus was a problem.

Posted by Dankwa Brooks at 5:00 PM

Email ThisBlogThis!Share to TwitterShare to FacebookShare to Pinterest
Labels: T.I.