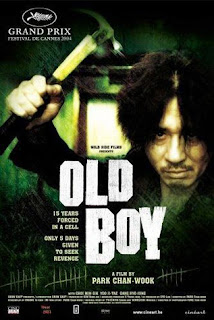 Summary: The film follows the story of one Oh Dae-Su (Choi Min-sik), who is locked in a hotel room for 15 years without knowing his captor's motives. When he is finally released, Dae-su finds himself still trapped in a web of conspiracy and violence. His own quest for vengeance becomes tied in with romance when he falls for an attractive sushi chef.

REVIEW by Cool Black
Since I’m not a fan of too much international cinema, (I’m a slave for American cinema. I know :-( ) I never even heard of OldBoy before Spike Lee signed on the direct the remake (read more about that here ) Having said that, let’s get on with the review.

If you think the summary above sounds way out, you don’t know the half of it. The film takes some wild detours into the “web of conspiracy” and that’s all I’m going to say about that.

The protagonist Oh Dae-Su (Choi Min-sik) and antagonist and Lee Woo-jin (Yu Ji-tae) are both excellent. This IS a tale of vengeance, but expect more dramatic scenes about the plot than action because of it. Truthfully the drama is more important to this film than the action and Choi Min-sik and Yu Ji-tae give great performances.

The direction by Park Chan-wook and cinematography by Chung Chung-hoon is some of the best I have ever seen. The visual style was well…excellent. Park Chan-wook gave necessary balance to both the visual and dramatic in this picture and excelled at both.

The violence in the film is for a reason, which again I won’t get into, but it has to do with the “quest for vengeance”. I’ve seen lesser films have unbridled violence for less than substantial reasons. There are really no elaborate action “set pieces” and again the action is organic to the film. Even when Oh Dae-Su finds out why he was imprisoned, the ensuing violence is not what you’d expect…well some of what you’d expect, but again I’ll have to refrain from saying more.

Ultimately, if you are a fan of action thrillers and excellent movies, you should see this film!

Posted by Dankwa Brooks at 9:10 AM