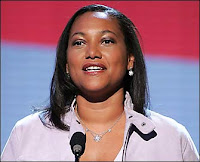 Discovery and Oprah ax OWN channel chief
By Yinka Adegoke

NEW YORK (Reuters) - Discovery Communications and Oprah Winfrey have pushed out Christina Norman (pictured left) as chief executive of OWN, the Oprah Winfrey Network, after a tough start for the five-month old cable network.

Discovery Chief Operating Officer Peter Ligouri will take over from Norman on an interim basis, in addition to his current role.

OWN, which launched in the United States on January 1, has struggled to win ratings in its first five months.

In a memo to staff on Friday, Winfrey thanked Norman for her hard work in getting OWN on air but said the new network had much to do.

"Given all that we have to do, the OWN board felt it was necessary that we have a different kind of leadership in place for the next phase of OWN's growth," Winfrey said in the memo, a copy of which was obtained by Reuters.

OWN, a joint venture between Discovery and Winfrey's production company, offers largely female-oriented programming with a combination of lifestyle, advice and uplifting shows.

Winfrey, regarded as the most influential woman on U.S. television, is expected to devote more energy to OWN in the coming months after the last original episode of her popular syndicated TV show, "The Oprah Winfrey Show," airs on May 25 on ABC.

Discovery CEO David Zaslav said on a conference call last month that OWN's ratings had been "below our expectations."

"We have been digging in. We are focused on what does the audience want from OWN. We are fully committed to the brand."

Discovery has said it will probably invest more in OWN in addition to the $215 million that it used to fund the joint venture through the first quarter.

Executives have said additional investment will depend on the progress of ratings through the next several quarters.

Ligouri, speaking late last month, said Discovery intended to produce about 400 hours of prime time original programming from then until the end of the year.

OWN: Oprah Winfrey Network - The Next Season

From April 2010: OWN: Oprah Winfrey Network reveals its upcoming slate of shows
Posted by Dankwa Brooks at 8:18 AM