The Boondocks Returning for Season Four 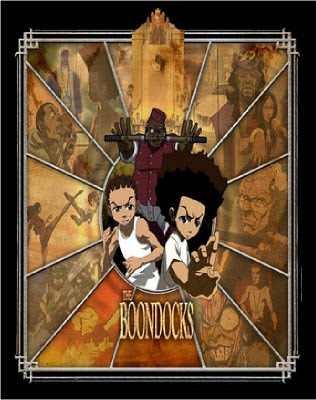 Voice casting director Andrea Romano tells us that the long-delayed season 4 of ‘The Boondocks’ is officially headed into production.

To say that The Boondocks isn’t your average cartoon would be a huge understatement. The adult-themed animated show – based on the comic strip of the same name by Aaron McGruder – has skillfully and raucously skewered everything from urban culture, politics, religion, and hip-hop, to racism, misogyny, social media, movies, and of course, celebrities.

Over its three-season run on Cartoon Network, The Boondocks has earned a Peabody award and garnered smash ratings for the network (the season 3 premiere drew 2.5 million viewers despite a two-year hiatus between seasons 2 and 3).

For a long time it was said that The Boondocks would be finished after season 3 – much to the dismay of the show’s fiercely loyal fanbase. Many viewers (and even some celebrities) have since voiced their desire to see The Boondocks return for season 4, and there have been some rumblings from the direction of the show’s cast of voice actors, which suggested that fans’ wishes might be fulfilled.

While attending Comic-Con 2011 we had a chance to sit down with legendary voice casting director Andrea Romano (Batman: The Animated Series, Animaniacs, SpongeBob SquarePants, Avatar: The Last Airbender). We were discussing her work on the upcoming animated feature Batman: Year One, when we got some truly awesome news:

The Boondocks season 4 is officially headed into production.

Here’s how it went: Romano was discussing the face that she’s worked with various big studios – including Sony, the studio behind The Boondocks cartoon series. Very little gets by yours truly, and in the midst of Romano’s speech I noticed she was referring to her work on The Boondocks in the PRESENT TENSE, rather than the past tense. I couldn’t just let that slip by, so I asked Romano if indeed she was getting back to work casting and directing new voices for The Boondocks season 4, to which she responded:

They’re making new ones – I just got word they’re gonna make another season. Can you believe it? After all this time. It’s been out of production for almost two years…The line producer sent me an email and said ‘I believe it’s snowing in hell – do you know what that means?’ and I said, ‘Are we making more episodes?’ Because we all said ‘It’ll snow in hell before we make more,’ because we just never thought after that much time they would [make it]. But apparently there is a fanbase desire and I love the show. I love making the show.

So there you have it: Huey, Riley, Grandad and the gang will be back! Of course we still don’t know when the show will actually make it back onto the airwaves, but if past seasons are any indication, they’ll need a while to get things together.

Official Website
http://www.boondockstv.com/﻿
Posted by Dankwa Brooks at 9:39 AM

Email ThisBlogThis!Share to TwitterShare to FacebookShare to Pinterest
Labels: Boondocks