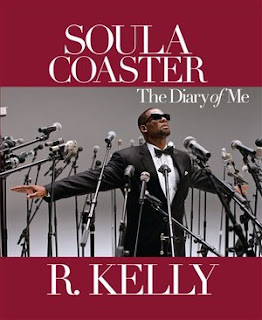 Let's get this out of the way up front: R. Kelly's autobiography does not discuss what really happened with the sex tape that almost sent him to prison. It does not include a single word about Aaliyah, the late singer Kelly allegedly married when she was 15. Other tantalizing incidents and individuals are glossed over. A tell-all, this is not.

Instead, "Soulacoaster: The Diary of Me" recounts the creative and family life of a once-in-a-generation performer and musician. Despite its guarded tone, the book is a vivid and entertaining journey that reveals much about the musical engine of a true artist.

Kelly, whose ability to write and produce hits for himself and others is unparalleled in modern R&B, does confront the defining theme of his career: the juxtaposition of the sacred and the profane, the sexual and the spiritual.

In the first paragraph of his life story, Kelly's beloved mother promises that he "could achieve all things through Christ Jesus." Turn the page, and Mama Joann is sneaking 5-year-old Robert into a lounge where she is singing with her band. Next she's in church, speaking in tongues. A few pages later, 8-year-old Robert is inside his mother's house on the South Side of Chicago, taking pornographic pictures of adults and being molested by a teenage girl.

And people question how "Sex Weed" and "U Saved Me" can come from the same man?

Music was a constant presence inside young Robert. He literally had sounds cascading through his mind, "like I had a radio playing nonstop in my head . I would hear melodies, although I never knew what they meant. In fact, I thought everybody heard the music."

Kelly also never knew his father and could not read due to an undiagnosed disability. (Kelly says he is still illiterate; his book was written with David Ritz, biographer of Marvin Gaye, Ray Charles, and other giants.) The only reason Kelly graduated from elementary school was because he could play basketball. All this created a shy, shameful boy who often felt "like an alien," a phrase that reappears throughout the book.

Kelly credits his middle-school music teacher, Lena McLin, with recognizing his talent. As Kelly tells it, the first time McLin laid eyes on him in class, she singled him out and said: "You are going to be famous. You are going to write songs for Michael Jackson. You are going to travel the world."

Did she really say that without hearing him sing or play a note? It's difficult to decide, especially since Kelly shades the facts elsewhere in the book. It's obvious, however, that Kelly loves McLin, and that she played an enormous role in Kelly's development. Strangely, she vanishes from the book after Kelly drops out of high school, and one can't help but wonder what this God-fearing pastor thought of her star pupil's raunchy material.

"Soulacoaster" goes on to describe the rise of Kelly's career and engrossing details of the creation of his many classic songs and albums. Fans of Kelly and black music in general will enjoy his description of working with artists from Jackson (Kelly wrote "You Are Not Alone" for him, unasked) to Celine Dion ("I'm Your Angel") to Notorious BIG (the title of their best collaboration can't be printed here).

His description of how he created "I Believe I Can Fly" must be read to be believed (it involves childhood dreams and melodies realized decades later). And Kelly does go into some detail about the conflicts with Jay Z during their tour, which led to Kelly being pepper-sprayed backstage and fleeing Madison Square Garden arena in the middle of a show.

He can get defensive at times. "I never considered my music sinful," he says. "For the most part, what people see onstage , R. Kelly bumping and grinding, dropping my pants, seducing women , that's all show business. What I do onstage doesn't mean I jump off the stage and continue my act in real life."

But Kelly's sex life looms large over the book. He is frank about his inability to remain faithful to his girlfriends or wife. And a shadow is cast by Kelly's trial on child pornography charges, which stemmed from a videotape that prosecutors said showed Kelly having sex with a minor.

Kelly was acquitted of all charges. The brief paragraphs where he discusses the "supposed sex tape" feel legally sanitized, and well-known stories about who leaked the tape and why are never addressed. "Certain episodes could not be included for complicated reasons," Kelly writes in the author's note at the beginning of the book.

In this all-access, reality-show era, it feels odd for a musician as bold as Kelly not to bare all. But when it comes to Kelly's music, "Soulacoaster" leaves a clear picture of an artist, unbowed, who still has "thousands of songs to write and sing."
Posted by Dankwa Brooks at 8:06 AM