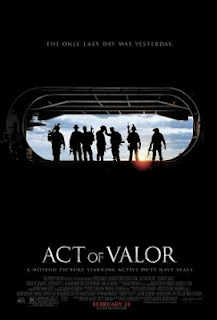 SUMMARY
A Navy SEAL squad on a covert mission to recover a kidnapped CIA agent, and in the process takes down a complex web of terrorist cells determined to strike America at all costs. The film stars active duty U.S. Navy SEALs and U.S. Navy Special Warfare Combatant Crewmen.

REVIEW by Cool Black
Before I start my review it's important to state the development of this picture (info from Wikipedia).

Development
In 2007, Mike McCoy and Scott Waugh of Bandito Brothers Production filmed a video for the Special Warfare Combatant-craft Crewmen which led the United States Navy to allow them to use actual active duty SEALs. After spending so much time working closely with the SEALs, McCoy and Waugh conceived the idea for a modern day action movie about this covert and elite fighting force. As Act of Valor developed with the SEALs on board as advisors, the filmmakers realized that no actors could realistically portray or physically fill the roles they had written and the actual SEALs were drafted to star in the film. The SEALs will remain anonymous, as none of their names appear in the film's credits.

For the Navy, the film is an initiative to recruit Seals. According to The Huffington Post, the Navy required the active-duty SEALs to participate.

Relativity Media acquired the rights to the project on June 12, 2011 for $13 million and a $30 million in prints and advertising commitment. Deadline.com called it "the biggest money paid for a finished film with an unknown cast”. The production budget was estimated to be between $15 million and $18 million.

Now to me the main selling point of this film was the active duty U.S. Navy SEALs and U.S. Navy Special Warfare Combatant Crewmen. This film had all the action scenes we’ve seen a dozen times before, but the Navy participation lends an air of credibility and authenticity to the action. The action scenes were GREAT. Everything else not so much.

The acting by the NAVY SEALs was—what it was. They weren’t actors and I’m fine with that. The story though was kind of rudimentary and something you could see on an episode of Hawaii Five-O, a show I hate for its simplistic plots. I could see that the producers were trying to present a complete story around the action and I’m fine with that as well.

Besides the Navy SEAL participation, the best thing this film had going for it was the great direction of the action sequences by Mike McCoy & Scott Waugh and the at times stunning cinematography by Shane Hurlbut. The first mission was FANTASTIC!

I also enjoyed its realistic depiction of the violence. From the site ParentPreviews:
Violence:
- Frequent depictions of beating, shooting, burning and explosion.
- Frequent explicit violence.
- Violent acts shown in clear, realistic manner, with detail, blood and tissue damage.
- Portrayal of torture.
Language:
- Frequent use of the sexual expletive and variations in non-sexual contexts.
- Frequent use of scatological slang, cursing, and vulgar expressions.

You don’t want to go to a movie about Navy Seals and see some PG-13 cutaways from the violence. You want an precise depiction as possible and I applaud them for that.

In the end the film played like a long training video which it kind of is, but I think the filmmakers did the best they could to turn this training video into a theatrical film and I enjoyed it as well as its realistic depiction of the action and its well earned R rating!


Cool Black’s Mad Commentary
This film got bad critical reviews across the board and I find that unfortunate. I think this film presented what was intended. No more. No less.

You got to see the Navy SEALs in action and like I stated it was an authentic looking depiction. I’d rather see an authentic action movie with a thin plot than some overblown CGI-ied (Computer Graphic Imaging) spectacle. I thought the movie was good and delivered as promised.

External Link
Read more about Act Of Valor at Wikipedia