Showtime has released the first promo for their new comedy House of Lies. It doesn’t tell you anything about the show, which centers on “a team of cutthroat management consultants who will do anything in their pursuit of money.” In fact, it’s just stars Don Cheadle, Kristin Bell, Ben Schwartz, Josh Lawson, and Dawn Oliveri in one of those bare, grayish sets designed for promo shoots. But the clip (and Cheadle especially) are so infectiously silly, I got a big laugh out of it. The cast drew me in, but now I definitely want to see more.

Official synopsis: HOUSE OF LIES is a half-hour comedy created, written and executive produced by Matthew Carnahan from the hit tell-all book House of Lies: How Management Consultants Steal Your Watch and Tell You the Time by Martin Kihn. The new comedy is a scathing look at a self-loathing management consultant from a top-tier firm. Cheadle stars as Marty, a highly-successful and cutthroat consultant who is never above using any means (or anyone) necessary to get his way with and for his clients. Kristen Bell (Veronica Mars) will play Jeannie Van Der Hooven, a razor-sharp, Ivy-League graduate who works at Marty’s firm. Co-stars include noted comedian Ben Schwartz (Undercovers) and Josh Lawson (Romantically Challenged) as Marty’s corporate team members; Dawn Oliveri (Heroes) as Marty’s acerbic ex-wife; the legendary Glynn Turman (In Treatment) as his psychoanalyst father; and Donis Leonard Jr. (The Fresh Beat Band) as Marty’s young son. Jessika Borsiczky (Flash Forward) will serve as executive producer, and Emmy winner Stephen Hopkins (Californication, 24) directs and executive produces. 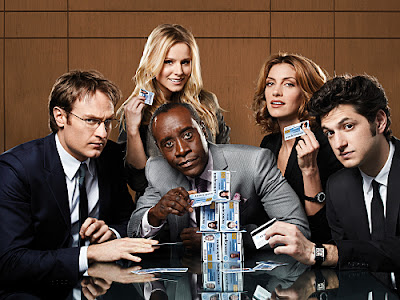 Watch the promo below


Cool Black's Mad Commentary: First found out about this series from the great site Shadow & Act. Having been a fan of Don Cheadle since his excellent work on Picket Fences, I will probably see anything he's in that looks interesting and this concept ESPECIALLY on uncensored cable sounds good ;-)
Posted by Dankwa Brooks at 6:05 AM