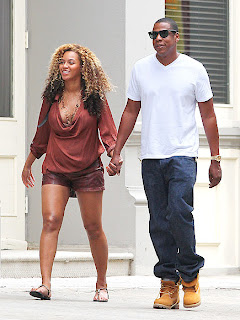 Beyonce and Jay-Z's baby, Blue Ivy, gets welcomed by celebs on Twitter
By Camille Mann

(CBS) After much anticipation and a slew of rumors, Beyonce and Jay-Z (pictured left) welcomed their baby girl, Blue Ivy Carter, over the weekend in New York City, according to reports.

The Grammy-winning singer checked into Lenox Hill Hopsital, on Manhattan's Upper East Side, on Saturday night under the name "Ingrid Jackson," but it didn't take friends and fans too long to catch on sending the Twittersphere into a frenzy.

"Welcome to the world Blue! We love you already," actress and good friend of the couple, Gwyneth Paltrow, wrote.

Fellow rapper Sean "Diddy" Combs also joined in, tweeting, "Congrats to Jay and B! And many more!"

"The most beautiful girl in the world," she tweeted.

Beyonce and Jay-Z have not spoken out about their daughter, but there has been some speculation that the couple derived the name from the roman numeral for four, "IV," because of the significance of the number four in their lives, reports People magazine (posted below)

Beyoncé and Jay-Z's baby girl Blue Ivy Carter arrived Saturday, and while little girls are customarily pretty in pink, this baby is also being surrounded by touches of blue.

This was the case over the holidays, when, in anticipation of the baby's birth, the parents-to-be sent pals blue Christmas gifts, a source tells PEOPLE.

Sources and fans suggest the couple chose the name "Ivy" because of the number 4 or Roman numeral IV, which is significant in Beyoncé and Jay-Z's relationship.

Beyoncé's birthday is Sept. 4, while Jay-Z's is Dec. 4; the two married on April 4 in 2008; they reportedly have matching "IV" tattoos on their wedding fingers; and Beyoncé named her latest album 4.

And the significance of the baby's first name, Blue? Well, Jay-Z has three albums with the word "blueprint" in their titles: The Blueprint was released in 2001; The Blueprint 2: The Gift & The Curse, in 2002; and The Blueprint 3, in 2009.

In lyrics, Jay-Z has rarely been coy about proclaiming himself the best rapper ever. "I'm the Blueprint, I'm like the map for 'em," he said in "A Star Is Born," from The Blueprint 3.

Fans have also chimed in on the name. "Blueprint was the hottest album ever sold by Jay-Z! their child's name makes a lot of sense!" Tweeted @kisssmyDIAMONDS

And Tweeted @omgitsralph: "There's a meaning in Ivy Blue. IVy = a roman numeral for 4 which is Beyoncé's favorite number and BLUE for Jay-Z's Blueprint albums. Wow."

Perhaps at some point the parents will make clear why they chose the name.

Until then, there's one thing the family is clear about, as proud aunt Solange declared on Twitter on Sunday. Blue Ivy, she said, is "the most beautiful girl in the world."