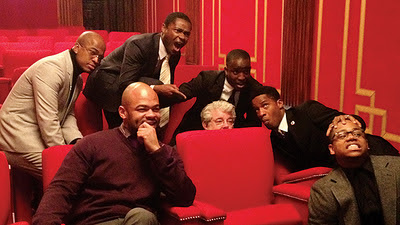 This story first appeared in the Jan. 27 issue of The Hollywood Reporter magazine.

On Jan. 13, Red Tails director Anthony Hemingway joined his cast, producers George Lucas and Rick McCallum and 15 surviving members of World War II's Tuskegee Airmen for a screening of the film with President Obama at the White House. Hemingway gives THR's Andy Lewis a detailed description of a once-in-a-lifetime experience.
There was an extensive background check. Once that was through, I received an official e-mail invitation from the White House: The screening would start at 5 p.m., but we could arrive at the White House around 3:30 for a private tour. We even got to peek into the Oval Office.
After the tour, the president and first lady greeted us in the East Room. He took a moment to thank us for what we had done for the story of the Tuskegee Airmen. Then we all posed for photos with the president. I gave him a soundtrack and a signed boxed set ofTreme, which I produce and direct — he said it's his new favorite show. For his daughters, I brought Red Tail pendants that I had made as gifts for the cast and crew.
There was a whole table of refreshments, including cookies shaped like Red Tail fighter planes. They also had popcorn and drinks laid out for us to take into the theater, but none of those little M&M boxes with the White House seal. I was looking for something like that to take as a souvenir.
When they escort you into the theater, you definitely feel like you're in a very comfy, intimate space. But it doesn't have cup holders, which made me nervous because I was afraid of spilling my drink. It was just us, a few Secret Service agents, the Tuskegee Airmen and a few staffers. The Obama girls weren't there because they were at a sporting event. I didn't see the president take any popcorn, which I jokingly called "political popcorn" because it had just the right amount of salt and butter. It was some of the best popcorn I've ever tasted.
Before the movie started, the president gave a little talk. He knows the story of the Tuskegee Airmen really well and was excited to champion the message of the movie. I actually got choked up when he paid homage to the Airmen. There was electricity in the room as we listened to the president make these heartfelt remarks. Then he took time to thank all of us by name. He said, "We are basically here to host you, so if you need more popcorn, just ask; or if you need a drink, let us know, and we'll get it for you." He made it really comfortable and friendly.
The president and first lady have special seats up front. The president stayed for the whole movie. I could see the staff checking their BlackBerrys, but the president watched the film uninterrupted.
The theater isn't set up that well. The sound could be better. The projector needs to be upgraded. It needs a Hollywood pro to go in there and redesign it.
When the movie was over, Obama thanked us again and said he was excited to show it to the rest of his family. I actually ran to the bathroom because I drank too much during the movie, and by the time I got back, the president had left for another engagement.
Red Tails was released by Fox on Jan. 20.
Posted by Dankwa Brooks at 3:50 PM