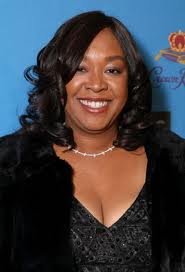 Creator Shonda Rhimes (pictured left), who cast Kerry Washington (pictured right) as a Washington, D.C., crisis PR expert, said the country has been ready for African-American leads for years. She referenced Diahann Carroll's lead turn on "Julia" more than four decades ago. The problem, she said, is that "people have failed to cast the actors that they should have been casting."

Rhimes and the cast spoke during a panel Tuesday at the Television Critics Association winter press tour.

After decades of African-Americans leading some of television's biggest shows -- including "The Cosby Show" -- series have increasingly featured African-American actors only in multi-racial casts that appeal to as many demographics as possible.

Laurence Fishburne was the key character on "CSI" before he departed at the end of last season, but even his show was an ensemble. NBC's "Undercovers," with two African-American leads, was quickly canceled last season.

"Scandal" co-star Columbus Short (pictured left) said minorities have been marginalized on television, and that he hopes Washington's work on "Scandal" will encourage more colorblind casting.

"I think there's a way people want to perceive people of color," he said. "This is what they are, this is how they work, this is how we accept them. Which is a completely gross overassumption of people. And I think this show... tells the story of people. It has nothing to do with color."

Posted by Dankwa Brooks at 1:53 PM